What is Oktoberfest beer? 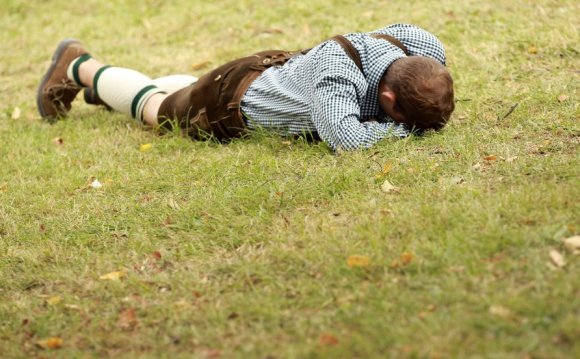 Marzen has a mixed origin. Some sources note the extremely close relationship between Marzen and Vienna beers. Ray Daniels notes that the term Marzen was first used for beers brewed in Vienna in the 1700’s. Marzen is also close in relation to brown beers brewed in Bavaria as early as the 16th century, though the term Marzen was not originally applied to this style. Most modern authors attribute the origin of the name “Marzen” to Vienna, as no references can be found of Munich Marzen’s prior to the late 19th century (Ref: Daniels), though simillar styles were being brewed in Bavaria much earlier.

Marzen, the German word for the month of March, refers to the month when these beers were originally brewed. Summer was too hot to brew and ferment beers properly, so by a 1539 ordinance in Bavaria, beer could only be brewed between the days of St Michael and Saint George (29 Sept-23 April).

As beer was not brewed in the summer, the last beers of Spring were made with a higher alcohol content and stored in cellars, often refrigerated with ice to last the summer. This higher gravity beer was named after the month when most were brewed – March or Marzen.

The modern Marzen and Oktoberfest styles may bear little resemblence to the early Marzen of Vienna or even Munich. The early Marzen was described as dark, brown and full bodied. In fact, the turmoil of the wars of the early 20th century Europe nearly brought an end to both Marzen and Vienna style beers, though the modern Marzen enjoyed a resurgence in popularity when the Munich Oktoberfest started up again after World War II. The Oktoberfest style, a slightly stronger version of Marzen, is brewed specifically for the world famous Munich festival each year.

The BJCP style guide describes Marzen as as a rich, slightly malty beer with a slight hint of toasted character from Vienna malt. No roasted or caramel flavors are present, and the beer has a fairly dry finish. Noble hops are present though should be only lightly perceived in the finished beer which is decidedly malty.

The original gravity of a Marzen is in the 1.050-1.057 range, lightly bittered with noble hops providing 20-28 IBUs of bitterness. Some “fest” beers are brewed at a slightly higher starting gravity. The beer is well attenuated, with a finishing gravity of 1.012-1.016. Color should be golden to orange-amber with a color range of 7-14 SRM. The alcohol by volume is 4.8%-5.7% and Marzen’s are usually fairly well carbonated.

Marzen is generally made from a combination of Munich, 2-row Pale Malt, Pilsner and Vienna malts. Generally, the malty Munich malts makes up as much as half of the grain bill, with either Pilser or Pale Malt making the balance of the grain bill. For extract recipes, a Munich based extract made from Munich and Pale malt is generally best to use as a base. Vienna may be added to substitute for 10-15% of the Munich malt to add a slightly more toasted flavor. A small number of homebrew recipes also add 5-10% Crystal or 5% Cara-pils malt to add body and head retention.

Hops for Marzen/Oktoberfest beers is typically of the Noble German or Bohemian variety, and the bitterness ratio (BU:GU) is generally around 0.5-0.6. Popular hops selections include Saaz, Tettnanger, and Hallertauer though occasionally American hops are used by homebrewers. Generally these are added only for bittering, and aroma or dry hops are rarely used.

The mash is almost always a single infusion mash for homebrewers in the middle range of around 152-154F for the conversion step. Purists can try a traditional German decoction mash, though in most cases it is unnecessary given modern highly modified malts.

Bavarian lager yeast or Marzen/Oktoberfest yeast is the prime choice for Marzens, with Bohemian Pilsner yeast providing a reasonable backup. Ferment ar around 50F (depending on yeast choice) and lager near freezing (33-37F) for at least 5 weeks.

Water treatments are rarely needed, but you might want to consider alternative water sources if your water is exceptionally hard.

Oktoberfest is Much Bigger Than Beer