Where in Munich is Oktoberfest held? 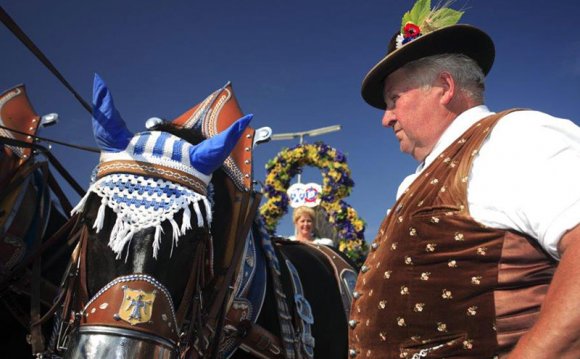 The Oktoberfest is a sixteen-day festival held each year in Munich, Bavaria, Germany during late September (and running to early October). It is one of the most famous events in the city and the world's largest fair, with some six million people attending every year, and is an enjoyable event with an important part of Bavarian culture. Other cities across the world also hold Oktoberfest celebrations, modeled after the Munich event.

Oktoberfestbiers are the beers that have been served at the event in Munich since 1818, and are supplied by 6 breweries known as the Big Six: Spaten, Löwenbräu, Augustiner, Hofbräu, Paulaner and Hacker-Pschorr. Traditionally Oktoberfestbiers were the lagers of around 5.5 to 6% abv called Märzen - brewed in March and allowed to ferment slowly during the summer months. Originally these would have been dark lagers, but from 1872 a strong March brewed version of an amber-red Vienna lager made by Josef Sedlmayr became the favourite Oktoberfestbier.

Since the 1970s the type of beer served at the festival has been a pale lager between 5 and 6% abv, and the terms Oktoberfest and Märzen are used by non-Oktoberfest brewers in Germany and the USA to market pale lagers of this strength. The color of these lagers may range from pale gold to deep amber, with the darker colours more common in the USA. Hop levels tend not to be distinctive, though some American examples may be firmly hopped. Modern beers sold as Oktoberfest and Märzen in Europe tend not to be too differentiated from other pale lagers of this strength, while older German and American influenced examples will be fairly malty in flavour and inclined to use a range of malts, especially dark malts such as Vienna or Munich.

The Munich Oktoberfest, traditionally, takes place during the sixteen days up to and including the first Sunday in October. In 1990, the schedule was modified in response to German reunification so that if the first Sunday in October falls on the 1st or 2nd, then the festival will go on until October 3 (German Unity Day). Thus, the festival is now 17 days when the 1st Sunday is October 2 and 18 days when it is October 1. The festival is held on an area named the Theresienwiese (field, or meadow, of Therese), often called d’ Wiesn for short.

It began with the Royal Wedding on 12 October 1810 of King Ludwig I and Princess Therese of Saxony-Hildburghausen. The original "Oktoberfest" occurred in Munich, on October 12, 1810: For the commemoration of their marriage, Crown Prince Ludwig (later King Ludwig I) and Princess Therese of Saxe-Hildburghausen (namesake of the Theresienwiese festival grounds) organized a great horse race (the marriage took place on October 12; the horse race on October 17 — therefore, there are different dates named as being the first Oktoberfest).

In the year 1812, the Oktoberfest was cancelled since Bavaria was involved with the Napoleonic war. In 1816, carnival booths appeared. The main prizes were silver, porcelain, and jewelry. In 1819, The founding citizens of Munich assumed responsibility over festival management. It was agreed that the Oktoberfest would be celebrated each and every year without exception. Later, it was lengthened and the date pushed forward, the reason being that the end of September in Bavaria often has very good weather. The high temperature in the first week of Oktoberfest nears 30°C which stimulates the thirst of the visitors. However, today the last week of Oktoberfest is still in October.

To honor the marriage of King Ludwig I and Therese of Bavaria, a parade took place for the first time in 1835. Since 1850, this has become a yearly event and an important component of the Oktoberfest. 8, 000 people — mostly from Bavaria — in traditional costumes walk from Maximilian Street, through the center of Munich, to the Oktoberfest. The march is led by the Münchner Kindl.

Since 1850, the statue of Bavaria has watched the Oktoberfest. This worldly Bavarian patron was first sketched by Leo von Klenze in a classic style and Ludwig Michael Schwanthaler romanticised and "Germanised" the draft; it was constructed by Johann Baptist Stiglmaier and Ferdinand von Miller.

In 1853, the Bavarian Ruhmeshalle was finished. In 1854, 3, 000 residents of Munich succumbed to an epidemic of cholera, so the festival was cancelled. Also, in the year 1866, there was no Oktoberfest as Bavaria fought in the Austro-Prussian War. In 1870, the Franco-Prussian war was the reason for cancellation of the festival. In 1873, the festival was once more cancelled due to a cholera epidemic. In 1880, the electric light illuminated over 400 booths and tents. In 1881, booths selling bratwursts opened. Beer was first served in glass mugs in 1892.

At the end of the 19th century, a re-organization took place. Until then, there were games of skittles, large dance floors, and trees for climbing in the beer booths. They wanted more room for guests and musicians. The booths became beer halls.