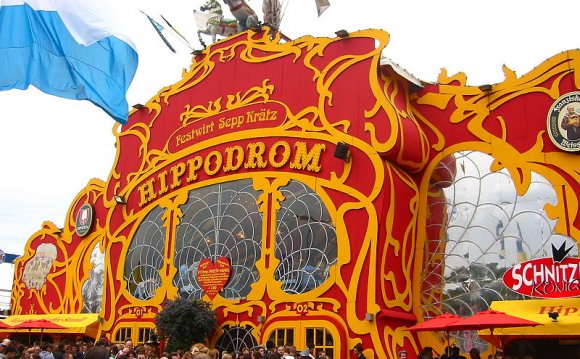 Oktoberfest has long become an international tourist destination. And while most of the Munich natives certainly speak some English, the festival still retains its traditional Bavarian origins. (To read more about that, check out my article on the .) When celebrating its 200-year anniversary in 2010, the Oktoberfest in Munich included a special section devoted to showcasing its history. Because this special was such a success, it will be included again this year. To come prepared, why not learn a few Bavarian words and phrases before you arrive? Here are 10 essentials:

To many, Oktoberfest is synonymous with beer festival. Ordering beer is easy, and the fact that “bier” in German is pronounced the same as in English makes it even easier. Just be sure you control how much of it you order!

In many of the tents, you will hear the notorious song “Ein Prosit, ein Prosit…” Prost means cheers in Bavarian, so before you drink that Mass Bier (1L beer), be sure to say that.

Bavarian pretzels in no way compare to the fake version that is sold on the streets of New York, for example. In fact, upon taking some Munich natives to the Big Apple, they were appalled at the pretzel that is sold at food trucks here; “it tastes like plastic, they said.” The true Bavarian version, on the other hand, is soft and made of fresh dough. You can get them in different sizes and they are a great way to assure that all that beer doesn’t get to your stomach so quickly.

Hendl at Oktoberfest are either ordered as a half or a whole. The most typical is to get Hendl with Pommes, which means French fries.

Bavarian dumplings have nothing in common with the Asian version. The German ones can come in different variations. For example, you can get Semmelknödel, which means dumplings made of bread (spices are added, too, but they tend to be very mild). Kartoffelknödel, on the other hand, are made of potatoes. Usually, they will be accompanied by a creamy sauce.

This word refers to the Theresienwiese, which is the festival ground where the Oktoberfest in Munich is held. The name goes back to the fact that in 1810, the Oktoberfest was initiated as part of the royal wedding celebration of Crown Prince Ludwig and Princess Therese. Her name still resonates in the tradition of the Oktoberfest today and is also the name of the subway stop where people get off to go to the festival.

In addition to chicken, there are hundreds of whole oxen being prepared for Oktoberfest. The place to get this kind of meat is at the Ochsenbraterei, literally meaning the place where the oxen are roasted.

8. An Guad’n (Bon Appétit in Bavarian)

So you’ve already learned how to say “Prost, ” which applies to cheers for drinking. To cheer on the eating, An Guad’n will help you out.