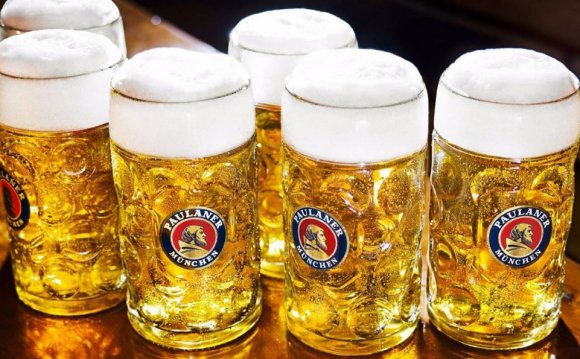 The annual beer blowout that is Oktoberfest kicked off this past weekend in Munich, and although thousands have already guzzled enough beer inside the festival’s Hippodrom to earn “hangover of the year, ” there’s still plenty to be had Stateside. Traditionally, Oktoberfest beers (aka Märzens) are brewed in the spring, stored in cold cellars through the summer, and finally tapped in the fall. A sweet-and-toasted malt complexity is the style’s hallmark, countered by spicy Bavarian hops and a crisp lager finish—it’s as if they were brewed specifically to pair with brats. So, fire up the grill and fill your stein with our favorite Oktoberfest beers of 2011.

Are you a traditionalist? If so, crack open a Festbier. Weihenstephaner may not be an officially sanctioned Oktoberfest beer (only breweries operating within Munich city limits are), but the beer’s upfront sweetness, toasted malt backbone, earthy hop bitterness and crisp lager finish make it a classic.

German culture is strong in Wisconsin, and the folks in Milwaukee party every weekend in September Oktoberfest-style to celebrate their heritage (Irish-Americans, take note). Of course, that’s pretty easy to do when you have an Oktoberfest beer as quaffable as Lakefront’s. Sturdy bitterness keeps the beer light on the tongue, while subtle floral hops add delicate accents to the swallow.

If you want something a touch stronger, grab a six-pack of Staghorn. Oktoberfest beers typically clock in between 4.8% and 5.7% ABV (considered strong by traditional German lager standards, hence the reason they’re the celebratory beer of choice), but Staghorn gives you a little more bang for your buck at 6.3% ABV. Subtle alcohol warmth finishes off this rich, malty beer.

This style’s know for its spicy hops, and this version’s generous use of Saaz and Tattnang varieties makes it the sharpest version we’ve tried. Spicy hops take the lead, accentuating the beer’s grainy malts and subtle lemon peel bite in the back. Bitterness? There’s enough to leave your tongue tingling.

We’ve all seen the Boston Beer commercials where founder Jim Koch dives face first into a handful of German hops, or waxes poetic about barley. His enthusiasm for Old World ingredients is definitely expressed in his Octoberfest, the richest on this list. Creamy malts impart smooth toffee and heavy toasted bread notes, while spicy Noble hops create a dynamic counter.

Sudwerk released a UC-Davis-themed Aggie Lager this year, but this month we’re opting for its Fest Märzen, one of the sweetest Oktoberfests out there. Sugary, caramel notes headline this brew, and neatly balance out sharp bitterness and prickly carbonation.

Magic Hat’s version is new take on the classic style: Brewed with cherrywood-smoked malts, Hex imparts soft, smooth smoke above its toasted malt base. Light cherry flavors string subtle sweetness through the swallow before robust bitterness wraps this beer up with a clean finish.

If the cooler weather already has you longing for winter warmers, grab a bottle of Breckenridge’s Autumn Ale, a Märzen/old ale hybrid. This beer has all the hallmark Oktoberfest flavors, but its roasted malt notes, heavier mouthfeel and 6.7% ABV create—as the label suggests—a pre-winter warmer.

The German Beer Song at OktoberFest in Festival Park, Home ...