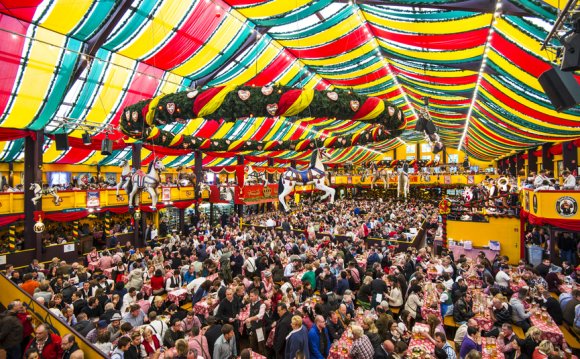 Munich's largest and most traditional breweries cordially invite you to join the festivities. Drink beer by the litre (teetotallers don't need to worry: sodas and water are also available), eat traditional Bavarian food such as pretzels with a diameter of 15 inches. Listen to live brass bands playing traditional Bavarian music as well as more up-to-date music, and enjoy yourself with hundreds of other people from all over the world, dancing and singing the hours away.

Augustiner-Festhalle
For a cosy and traditional experience, head for the Augustiner Festzelt. Its particularly authentic atmosphere is partly thanks to the fact that the beer served here comes from Munich’s oldest brewery and is still tapped from classic wooden kegs. The regional delicacies and the friendly waiters and waitresses also make the Augustiner tent one of the most rustic of them all.

Armbrustschützen-Festhalle
Run by the shooting club ‘Winzerer Fähndl Schützengilde’ it is providing room to accommodate around 7, 500 people. Decorated in the unmistakable style of the Alpine foothills, the German crossbow championships are traditionally held here every year during the Oktoberfest. The meat for the Bavarian delicacies comes entirely from their own livestock and great attention is paid to ensuring the quality is carefully monitored.

Fischer-Vroni
If you feel like sampling something other than the traditional roast chicken, pretzels and other standard fare, the highly traditional tent of Fischer-Vroni is just the place. As well as the usual Oktoberfest delights, the menu includes numerous fish dishes and, of course, the original Bavarian Steckerlfisch (fish on a stick) – a typical speciality. This rustic and cosy tent is not quite as loud as the big beer tents.

Hackerbräu-Festhalle
It truly is the heaven of the Bavarians: the Hacker Festzelt. With its famous white and blue ceiling, which was designed by Oscar winner Rolf Zehetbauer and can even be opened up depending on the weather, it is one of the most famous tents of the Okotberfest. It provides room for around 9, 300 guests and is the size of a football pitch. The Hacker tent remains firmly in Munich hands and also attracts many young visitors.

Hofbräu-Festzelt
The Hofbräuhaus is known far beyond the borders of Bavaria, with its reputation extending around the world. The same goes for the Hofbräu Festzelt. Almost 10, 000 people can be accommodated here and there’s even a standing area for enjoying a swift litre of beer. The ceiling is decorated every year with 16 tonnes of hops, in the middle of which the angel Aloisius sings his grumpy hosanna.

Kufflers Weinzelt
Wine and beer make for a great mood! For 200 years now, people who like drinking wine have also been enjoying the world’s largest festival. The Weinzelt (wine tent) also looks quite different from the neighbouring tents – instead of beer benches, guests sit in u-shaped wooden booths, reminiscent of a Franconian wine garden.

Although it’s pretty hard not to spot the Löwenbräu-Festzelt with its 37-metre high tower, you certainly can’t fail to hear it. Above the entrance sits a mighty lion which roars its unmistakable “Lööööwenbräu” every minute for all to hear. It therefore comes as no surprise that the players of TSV 1860, better known as ‘die Löwen’ (the lions), are regular guests here.

Say "hello" to the newcomer on the Oktoberfest: The Marstall-Festzelt. Everybody is curious how this replacement for the Hippodrom will actually turn out. The new tent with a capacity of more than 4.000 seats takes its name from the former riding school of the bavarian court, built by famous architect Leo von Klenze in the 19th century. So it's no big surprise that the Marstall's design is "horse"-themed. Some visitors, though, might be more interested in the Spaten beer and typical bavarian delicacies served here.

Paulanerbräu (Winzerer Fähndl)
The Paulanerbräu Zelt, also known as the Winzerer Fähndl, can be easily spotted from a distance because of the huge beer tankard that rotates on top of the tent’s tower. This lovingly decorated tent is especially renowned for its extremely cosy atmosphere and has a large number of regular guests, including the players of FC Bayern München. The clientele e is traditionally a little older – one reason why it is so easygoing here and not quite as wild as in the other tents.

Pschorrbräu-Festhalle (Bräurosl)
Known popularly as simply Bräurosl, this tent was named in honour of Rosi Pschorr, the daughter of the brewery owner and former publican here at the Oktoberfest. In the Festhalle Pschorr particular importance is attached to the musical entertainment, which traditionally features the tent’s very own a female yodeller. Another tradition, albeit a fairly recent one, is serving as the meeting place of the gay community on the first Sunday of the Oktoberfest.

Schottenhamel-Festhalle
The Schottenhamel is the oldest and most traditional tent, with the Schottenhamel family being represented at the Oktoberfest since as far back as 1867. Ever year sees the traditional tapping of the first keg of beer by the Mayor of Munich. On average the public that attends is very young and student-oriented, making the tent a popular meeting place for young people.