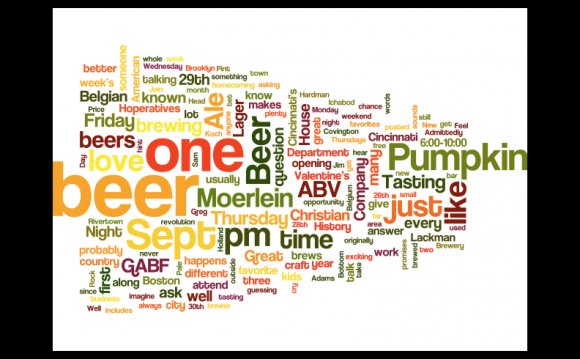 Elections and drinking have a long history in the United States. In the 19th century, wagons loaded with casks of cider and whiskey were ubiquitous at election time, as candidates looking for votes greased the machinery of democracy with the sweet lubricant of alcohol. The Reform Age put the kibosh on the fun by passing Blue Laws that prohibited alcohol sales on Election Day and banned free beer at the polls.

Magic Hat Brewing Company intends to take democracy back to the taverns where it was born with the release of its Participation Variety Pack, a 12-pack of beers selected to provoke political discussion. At the same time, it has partnered with Head Count, a national nonprofit organization dedicated to voter registration. Brewery representatives will be on hand with Head Count registrars to encourage participation in political dialogue at the bar and political action at the polls.

"People forget that the Constitution and Bill of Rights were conceived in local taverns, " says Magic Hat "conductor of cosmic symphonies" Alan Newman. "Local taverns were the original hotbeds of political action. Somehow we have come to believe that bars today are only for getting drunk and meeting members of the opposite sex, but that is wrong. They are, as they have always been, the ultimate community gathering place where friends and neighbors come together to talk about what's going on."

The Participation 12-pack includes three bottles each of #9, Circus Boy, Jinx and the new Participation Lager. The Participation is an All-American "pre-Prohibition" lager brewed with pale malt, Columbus hops and corn, replicating the style developed by German immigrants who sought to create their venerable Old World lagers using the ingredients at hand.

It's great to see craft brewers embracing lager styles and bringing the kind of attention to detail that made these beers popular in the first place. The Participation has a thick, billowy head and a husky graininess that demands notice. The spicy, grassy hops come on strong midway in and linger in a pleasing way. The corn adds a hint of sweetness, but avoids the vegetal blandness that plagues most American industrial lagers. Participation definitely reaches across the aisle to unite Flavorcrats and Drinkabilicans.

The Participation Variety pack also includes the brewery's fall seasonal, Jinx, that nicely balances the smokiness and caramel sweetness of a Scotch ale with the roastiness and chocolate notes of a doppelbock. At almost 7 percent ABV, it's certain to enliven any political debate.

Oktoberfest in Munich kicked off this past weekend, and local bars and brewpubs are following suit with their own more modest-sized parties.

If anyone in Atlanta knows how to brew an authentic German-style lager, it's Glen Sprouse of 5 Seasons in Sandy Springs. His Vienna and Helles styles are spot-on, and each year he brews an authentic festbier for the brewpub's Oktoberfest celebration. On Sat., Sept. 27, starting at 3 p.m., guests can enjoy as much German food and beer as they care to consume for $60 per person. More modest celebrants can order a la carte.