What kind of beer is Oktoberfest? 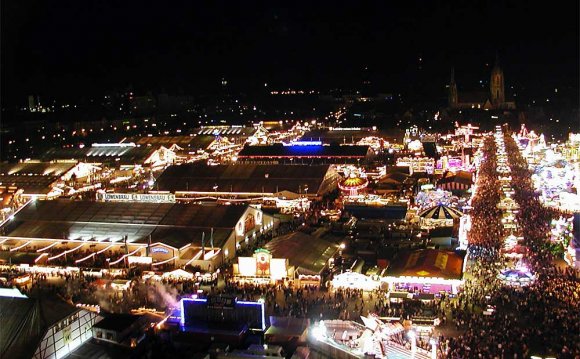 At his Beer Hunter site, Michael Jackson writes: From "March" in German. Originally a beer brewed in March and laid down in caves before the summer weather rendered brewing impossible. Stocks would be drawn upon during the summer, and finally exhausted in October. In Germany, this tradition has come to be associated with one specific style. Mrzenbier has a malty aroma, and is a medium-strong version of the amber-red Vienna style. It is seasonal to the Oktoberfest, where it is offered as a traditional speciality alongside paler beers of a similar strength.

In Germany, Mrzen has in recent years been replaced at Oktoberfest by a paler "Oktoberfestbier" to suit broader international tastes. Many south Bavarian breweries still faithfully reproduce Mrzen, though in small quantities. Most of Munich's big brewers still brew a draft Mrzen at Oktoberfest time (September-October) for sale in their beer halls, notably Hofbrau and Spaten. Typically, a Bavarian Mrzen will be copper-red, with a full-bodied maltiness, a little spicy and dryish.

Oktoberfest (or Octoberfest) has become a very popular style for U.S. brewers to produce, with many in brewpubs choosing to make a fest beer the only true lager they make during the year.

The result is that American consumers have many wonderful choices, with far too many regional choices to list completely. These include bottled products from craft breweries, but also many available only on draft. And many brewpubs make a Fest beer, although some are a traditional lagers and others may be ales (be sure to ask before ordering).

There are several nationally distributed Oktoberfest/Mrzen beers, both German- and U.S.-made, to choose from. Most of these beers are about 5.6-5.9% alcohol by volume, somewhat stronger than Budweiser (5%).

From the Ayinger Brewery in Germany. The beer is amber, with plenty of the malty flavor expected from Bavarian malts and a sweet accent. Spicy-dry aftertaste with a faint mild hop background.

Beck's Oktoberfest
From Germany. Brewed for export to the United States. Reddish-amber beer. Shows a bit of malt sweetness, less hoppiness than others of the style.

Paulaner Oktoberfest-Mrzen
From Paulaner Brewery in Munich. Reddish-amber, richly malty, sweet and some fruitiness. Exits with a final dryness.

Pete's Oktoberfest
From Pete's Brewing Co. A bright amber beer, lush and malty, showing off its caramel malts. A hoppy rendition of this style, both in aroma and finish.

Samuel Adams OctberFest
From Boston Beer Co. A combination of four malts produces a deep amber beer. Plenty of malty flavors up front, balanced by a combination of noble hops.

Spaten is Munich's original brewery and lays claim to producing the first Oktoberfest beer in 1872, its Ur-Mrzen. Spaten also brews a paler - more golden than amber - Oktoberfestbier. Both versions are well balanced with a proper dryish finish.

What kind of beer?