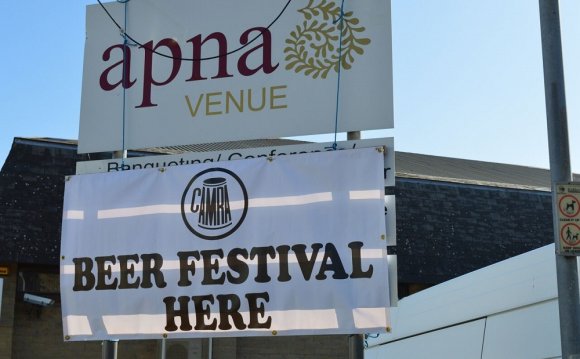 Around 75 real ales and 20 ciders will be on offer at the group’s beer, cider and perry festival, Thursday October 1 to Saturday October 3.

The German-style festival, to be held at the APNA Venue Leisure Centre in Spring Grove Street, will raise money for the Huddersfield and District Army Veterans Association.

Founded in 1897, it is the second oldest uniformed veterans assocation after the Chelsea Pensioners, and formed the guard of honour for Queen Elizabeth’s visit to Huddersfield in 2007.

The festival will include brews from Huddersfield microbreweries, as well as commemorative bottles of beer from Empire Brewing.

October is also CAMRA’s Cider Month — and a specialist bar will showcase local ciders and perries from local breweries including Pure North and Uddersorchard.

And don’t worry about lining your stomach — food will be on offer throughout the festival.

The three-day event will also be selling merchandise from its Breweriana stall, such as pump clips, beer mats, beer labels, bottles, bottle openers, glasses, bar towels, trays, T-shirts, books and more. Stock is urgently needed — to donate an item to sell on the stall, call Bob Tomlinson on 78.

Admission is £3 (free for CAMRA members), including a souvenir glass sponsored by the Nook Brewhouse.

Having trouble choosing a tipple? Here’s our guide to real ale:

MILD —Usually dark brown in colour, it’s not as strong as other ales and is quite easy-drinking, often fused with roasted gain and toffee notes from darker malts.

BITTER — Copper or bronze coloured. It’s bitter taste is balanced by malt and citrus from hops and yeast - and if you’re a fan of stronger brewers, best bitter is for you.