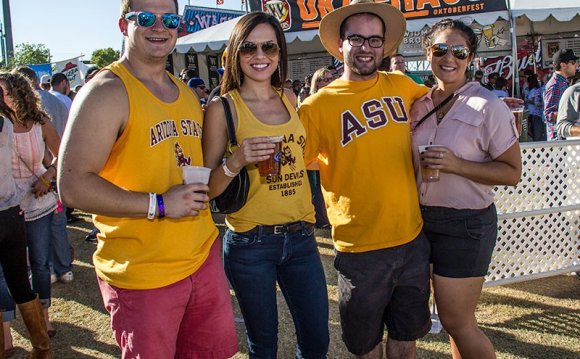 Oktoberfest is a time-honored tradition world-wide. It’s a time to get together and not only eat, drink and enjoy good company, but also a chance to give back to the community.

At least that is what Four Peaks Brewing Company is doing as the title sponsor of Four Peaks Oktoberfest at Tempe Town Lake Oct. 9-11, which helps benefit Tempe Sister Cities.

It is Four Peaks’ third year sponsoring the free event after a brewery expansion afforded them the ability to provide enough beer for the event.

“Prior to that we just didn’t have enough beer to support an event that size, ” said Greg Ross, Four Peaks’ marketing director. “Once we had the beer it made sense to be able to do it.”

Tempe Sister Cities, a program that offers student, professional and humanitarian exchanges, provides many of the volunteers for the event and much of their fundraising comes from event proceeds of Oktoberfest, which is in its 43rd year.

“This is the No. 1 biggest thing we put on all year, ” said Bobbi Jones, event coordinator for Oktoberfest. “This is the single most (important) event that raises the money for the kids’ trips... It’s all paid by Oktoberfest.”

The event is free to enter but costs apply for food and, of course, beer, with a portion of the proceeds benefitting Tempe Sister Cities. On Sunday there is also a special where, for $20, festival goers will receive two beers, a brat and a stein.

So, while approximately 150, 000 people will guzzle down various Bavarian brews and brats, they will also be doing their part to benefit the community.

“It goes beyond just pouring beer Friday, Saturday and Sunday, ” Ross said. “What we’re trying to do is we’re trying to make this a statewide initiative that Four Peaks can draw from many of its resources, but also help spread the benefit beyond just Sister Cities.”