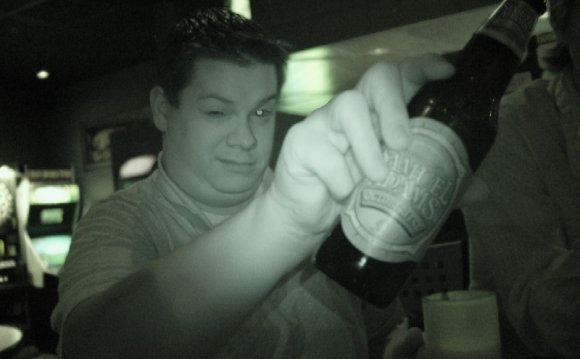 Note: Please welcome our new beer bureau chief Maggie Hoffman, who you may recognize from the delicious site Pithy and Cleaver. Maggie is a native of Portland, Oregon (which supposedly has more breweries per capita than any other American city) so she knows a thing or two about craft beers. This week she tries 12 Oktoberfest beers—don't worry, some friends helped. Take it away, Maggie!

'Tis the season for Märzenbier! The 176th Munich Oktoberfest is winding down this weekend. According to the festival's official website, it's a success, with more visitors and more beer consumed than last year. Tough times may be forcing attendees who are strapped for cash to prioritize buying beer over souvenirs and carousel rides, but we're not going to fault them for that.

What's the deal with Märzenbier? Before the advent of refrigeration, it wasn't really safe to brew beer during the heat of the summer. So the last batch of beer in early spring—named after the month of March—was brewed especially strong and malty and put into ice-cooled cellars and caves to mature. After a summer of slow fermentation, these beers were served at harvest festivals in the fall. The long fermentation makes märzens smooth and beautifully bronze, caramel-laced, and juicy with just enough hop bitterness.

Except it's not actually what they're drinking in the tents in Munich. In recent years the festival has switched to serving a lighter festbier that's not brewed in the traditional märzen style. So if classic, coppery märzens are what you're looking for, you shouldn't feel too bad if you didn't make it to Germany this year. We decided to taste a few traditional German märzens (along with one festbier in the new straw-colored style) head-to-head against a few interpretations from American craft brewers.

The German beers tended to be a bit easier to drink, smoother and more balanced, perfect for a long day (or weekend, or two weeks) of harvest time festivities. The American beers were more varied and more polarizing—some tasters loved the stronger, more aromatic examples, though others felt those beers were heavy-handed. After tasting twelve Oktoberfest beers (don't worry, Mom; we shared them with a group), we're confident that we've found some winners.

Our results, after the jump.

***** Our new favorite
**** Awesome, worth remembering
*** We'd consider buying this again
** There are probably better options
* No, thanks, I'll have water.

All ratings are subject to personal taste, you might love something we hate and vice versa.

Bring Me a Liter!

Hacker-Pschorr Originial Oktoberfest (Munich, Germany) 5.8% ABV
Our tasters loved this aromatic beer. Smooth and well integrated, with a true depth of flavor. Tasters described the flavor as nutmeggy with floral and yeasty notes. The rich, malty taste seemed particularly suited for fall. A bit heavier than the other German beers.
****

Paulaner Oktoberfest-Märzen (Munich, Germany) 5.8% ABV
A perfect beer for fall. Quite red in color, this classic Märzen has a creamy mouthfeel and refreshing tinge of hoppy brightness. The Paulaner had a sweetness with a hint of apricot flavor. One taster said it reminded her of Earl Grey Tea. This coppery brew was very drinkable, simpler than Hacker-Pschorr but with slightly more complex than the Spaten.
****

Hofbrau Oktoberfest (Munich, Germany) 6% ABV
This straw-yellow beer isn't a traditional Märzen, but we still liked it a lot. Though it was the lightest in color of any we tried, the taste had much more backbone than we expected. The Hofbrau was citrusy and bright, with a bit of a hoppy kick and a hint of herbs and licorice. It was fun, crisp, and quite drinkable, but we missed the festive copper color and caramel malts.
***1/2

Spaten Oktoberfest Ur-Märzen (Munich, Germany) 5.9% ABV
This copper-colored Munich beer had especially lively carbonation. We found it easy to drink and enjoyable, though perhaps a little hoppier and slightly less balanced than the other German beers. Light malty flavors and a pleasant (if quick) finish.
***

Stoudts Oktoberfest (Pennsylvania, USA) 5% ABV
This amber beer had a lovely smooth malt flavor well-balanced with hops. The hint of butteriness and nutty aftertaste were appealing. This is a drinkable beer with similarities to the Spaten.
***

Left Hand Oktoberfest (Colorado, USA) 6% ABV
This is a full-bodied beer, a slightly sweet and intensely herbal twist on the märzen style. One taster said it was like the Hacker-Pschorr but more, and named it his favorite of the evening. This was the most potent beer we tasted, with a striking black licorice flavor and an earthy maltiness. Toasty notes were accented with a hint of ginger. This beer was divisive among our group—if you're into the West Coast style of big beers, you might love this, but if you hate the flavor of old-fashioned black licorice, back away from the Left Hand.
***

Beck's Oktoberfest (Bremen, Germany) 5% ABV
Among the least potent of the beers we tasted, which might make it good for a long session of drinking, but at first sip we found it a bit watery. A caramel malty note, but as one of our tasters said, "You wouldn't describe it as challenging." The slightly sweet finish was nice.
**1/2

Victory Festbier (Pennsylvania, USA) 5.6% ABV
This beer had a smooth maltiness but not as much fullness of flavor as we expected. While some tasted notes of orange and found it refreshingly pure tasting, others wished for more complexity.
**1/2

Blue Point Oktoberfest (New York, USA) 5.01% ABV
This drinkable beer reminded some tasters of the Beck's, though it was more aromatic and had an alcoholic edge. (Some tasters found it a bit metallic.) Though the Blue Point had a buttery flavor, it lacked some of the spicy bass notes we found in the other Oktoberfests. If you like Blue Point's Toasted Lager, you'd probably enjoy this beer as well. It could be interesting to compare the two side by side.
**1/2

Thomas Hooker Octoberfest Lager (Connecticut, USA) 5.8% ABV
While some were put off by the bitter finish and compared the aftertaste to burnt clove cigarettes, others enjoyed the full flavor with hints of toffee, orange peel, and juniper berries.
**

Köstritzer Oktoberfest (Bad Köstritz, Germany) 5.6% ABV
This highly carbonated beer lacked the malty sweetness of some of the others; instead, it seemed to have a rather one dimensional dryness, and reminded us of burnt popcorn.