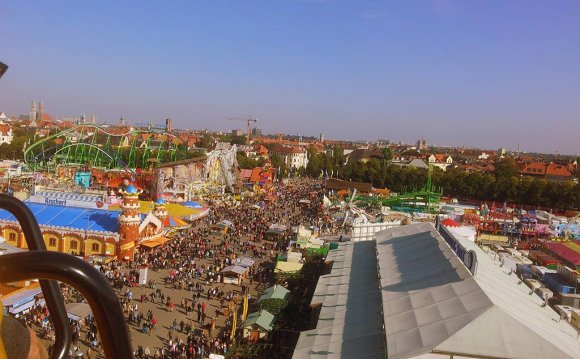 Revelers reached for the first beer mug at Hofbraeuhaus beer tent during day 1 of the Oktoberfest 2013 beer festival in Munich, Germany. The Munich Oktoberfest, which this year will run from Sept. 19 through Oct. 4, is the world's largest beer fest and draws millions of visitors. Photo: Getty Images

Oktoberfest, a nearly two-week long German celebration of beer and revelry, is set to begin across Germany Saturday and continue through Oct. 4. Versions of the festival will be celebrated throughout the nation, though the original autumn festival takes place in Munich, as it has for over 200 years.

Despite its name, Oktoberfest now begins in September because of the chilly weather in the Bavaria region in October. The first Oktoberfest took place from Oct. 12-17, 1810 to celebrate the marriage of Bavarian Crown Prince Ludwig to Princess Therese von Sachsen-Hildburghausen.

The five-day celebrations toasted the royal couple and ended with a horse race in the town square. Since that first celebration, festivities were held every year to commemorate the royal marriage. By 1896, the first beer tents were erected, featuring beverages from local Munich breweries to celebrate the regional drink.

If you go to Munich today, however, the focus of most Germans during Oktoberfest is not Prince Ludwig. It's the beer. Beer tents are set up throughout Munich to host several of the largest local breweries who attend the festival every year, including Augustiner, Hofbräu, and Lowenbrau.

All told, the tents can hold tens of thousands of visitors at any one time.

Mugs of beer are pictured during the Oktoberfest in Munich. Photo: Reuters

Waitress serves beer during the opening day of Oktoberfest in Munich Photo: Reuters

German authorities estimated that at least six million attend the Munich festival every year, and consume upwards of 6 million liters of beer, or approximately 12 million pints. With such high consumption, folks tend to get a little rowdy at the two week-long party, damaging property and getting into brawls. The Bavarian Red Cross treated 7, 900 people in 2014, 600 of whom had alcohol poisoning, Business Insider reported.

Visitors to Munich's Oktoberfest can enjoy their beer(s) with an array of local foods as well, such as Schweinsbraten (roast pork), Haxn (knuckle of pork), or Steckerlfisch (grilled fish on a stick). Of course, there's always bratwurst sausages and sauerkraut for the traditionalists.