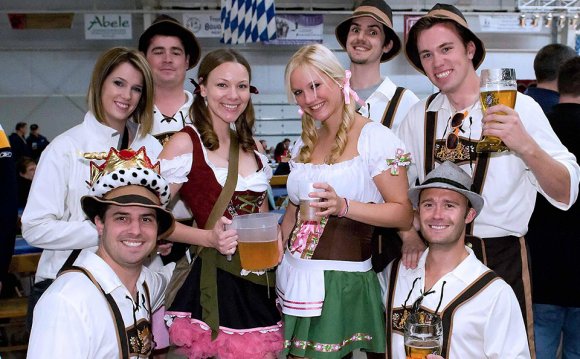 Last week I picked up a six pack of Frankenmuth Oktoberfest at Krogers for $9.99. I'm in the mood for an Oktoberfest tonight so I thought that I would try my local brewery's example to see how it stacks up to the rest. No visible bottling date. Poured from a brown 12oz bottle into a mug.

A- The label is pretty plain and simple with the typical blue and white Oktoberfest pattern, I really like the custom caps for this beer, they look really nice. It poured a nice light caramel copper color that was pretty clear. It had three fingers worth of fluffy white head that died down to a rocky fingers worth that left lots of nice spotty lacing that all in all made for a good looking Oktoberfest.

T- The taste starts of with that nice mixture of caramel and bready malts that I picked up in the aroma, but when it comes to the taste the caramel malts seem to stick out the most, but this beer still keeps a pretty prominent bready flavor and it isn't nearly as sweet as the aroma was. The hops are earthy and spicy, it seems like they lean more toward the spicy side which along with the larger hops presence makes this beer stick out from some of the more traditional Oktoberfests. The finish was more bitter then most, but it wasn't over the top.

M- Crisp, clean, medium bodied and carbonation was on the high side but I really liked it and I thought it worked very well, the mouthfeel of this beer is how a good Oktoberfest should be.

Overall I feel like this is a good Oktoberfest, but compared to others it's just slightly above average. There's nothing off or wrong about this beer but as far as the flavor and aroma go they feel a little subdued, I know this isn't the most flavorful style but I have had other ones that have managed to squeeze out more flavor, so I know it can be done. The flavors and aromas that were there were nice and true to the style and they were balanced well even with the more larger hops profile that this beer had, I liked that and I wouldn't change it, but a little more caramel malts to go along with those hops would have been perfect. As in any properly done Oktoberfest, this beer has great drinkability, a six pack of this wouldn't be hard to make disappear when I am in the Oktoberfest mood. What I liked most about this beer was the Mouthfeel, it was perfect for it's style, it also had a very good appearance. What I like least about this beer was the aroma, it was a duller then most. I don't think I would choose this over some of the other Oktoberfest's, I like to buy local but when Samuel Adams Oktoberfest is cheaper and tastier, Frankenmuth Oktoberfest gets overlooked. This beer is worth a try but it isn't really a stand out for it's style. Not a bad beer but so far it's my least favorite offering from the Frankenmuth Brewery, but I think with a couple tweaks in the recipe this beer could hold its own with some of the big dogs, the hop profile is a stand out and I like that.