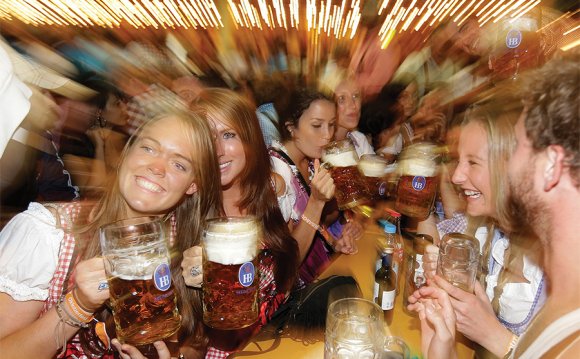 The finalists for the American German Club of the Palm Beach's 2014 Miss Oktoberfest competition have been selected, and Clean Plate Charlie has the details on how you can get involved in the upcoming pageant and official coronation dinner.

On Saturday, August 16 the Lake Worth all-volunteer, non-profit social club will host its second annual Miss Oktoberfest pageant, as well as the finals for the region's Masskrugstemmen championship - or stein lifting competition.

The American German Club was established in 1967 for the purpose of fostering an appreciation of German culture, and to share an understanding of German tradition and customs with the surrounding community.

Last week, four volunteer judges selected 10 finalists to compete in this year's Miss Oktoberfest pageant. Out of the group, just one contestant is from Broward County. A total of four contestants hail from Boynton Beach; two from West Palm Beach; and one each from Jupiter, Wellington, and Lake Worth. And although the club does not mandate participants have German heritage, each of the 2014 contestants do have a German, Bavarian, or Austrian background.

To narrow down the choices, judges selected the finalists based on who they felt would best represent the American German Club as their "Good Will Ambassador."

"We were looking for how each candidate would explain their ideas for encouraging the furthering of German culture in Palm Beach County, " Jennifer McDaniel Hutchinson told Clean Plate Charlie. "We also asked the for the essay to incorporate any other information they felt we should consider. These responses were our [top priority in the] selection process, because charisma and enthusiasm are extremely important for this role."

Moving forward, the contestants will be competing against one another to show their potential to serve as Miss Oktoberfest. The pageant will include formal introductions and a "parade of gowns, " where judges and audience members will have the opportunity to see the contestants in person. Finally, each girl will be asked a mystery question, and evaluated on physical presence, ability to communicate, and their response. Each of these five categories can earn a score of 1 to 5 points, and each contestant can earn a maximum total score of 100 points.

South Florida native Jessica Wittenbrink holds the title as the inaugural 2013 Miss Oktoberfest. A graduate of Wellington High School, Wittenbrink - formerly Miss Palm Beach County 2010 - has always had a passion for volunteerism in church, community events, and charitable fundraising events. In holding the title as Miss Oktoberfest during it's inaugural year, Wittenbrink "truly embraced her German heritage, and developed a deep admiration for the German culture and warm, beautiful people, " said McDaniel Hutchinson.

"This year, each of these fine young ladies brings a tremendous amount of talent and charm to the competition, so the judges have a tough decision ahead, " said McDaniel Hutchinson.

The coronation dinner will also include authentic German eats, included with a paid adult ticket. During the event, music from Alpine Express, an authentic German band, will perform from 7-11 p.m. The Original "Auerhahn Schuhplattler" of Miami will also be performing during the score tally. The folk dance originated in Bavaria, a province in southeast Germany, otherwise known as schuhplatteln - which translates to "shoe-slapping, " but also includes thigh-slapping, hand-clapping, twirling and waltzing.

The Steinlifting Final Championship sponsored by Hofbrau will take place in the club's biergarten. The final winner will be named the 2014 champ for the American German Club of the Palm Beaches, and will be flown to New York City to participate in the 57th Annual German-American Steuben Parade in September as a regional qualifier. The final winner of this event will participate in the U.S. Steinlifting Championship after the parade in Central Park, and will be sent to Munich, Germany to tour the original Hofbrauhaus.

The 2014 Miss Oktoberfest pageant and coronation dinner will take place Saturday, August 16 at the American German Club of the Palm Beaches. Doors open at 5 p.m., dinner will be served from 6:30 to 7:30 p.m., and the pageant will begin at 8 p.m.

Seating is limited, so reservations are recommended. Tickets can also be purchased $20 in advance by calling 561-294-2429, or online at